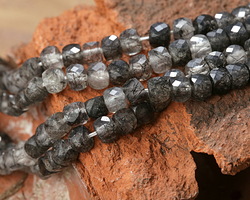 Fascinating tourmalinations give these monochromatic stones an extra edge. Uniquely shaped, these little stunners are great anchors to minimalist chain earrings, or strung together on bracelets.