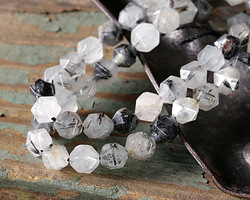 Get lost in the incredible beauty of tourmalinated quartz with this eye-catching star cut strand. Streaks of tourmaline and translucent quartz are quite the pairing. Add these dramatic beauties to contemporary earrings, hand-knotted necklaces, and so much more. Please see additional photos for variance.