Summer Savings Week 2: All Czech, Recycled Glass, and Seed Beads are on sale! 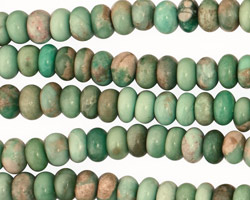 Variscite was first described in 1837 and was named for Variscia, the ancient Latin name of Vogtland, Germany, where this gemstone was first discovered. Gemstone quality Variscite is found in many locations, including Utah and Nevada in the United States as well as Australia, Brazil, France, Germany, Poland, and the United Kingdom.

Our variscite beads contain soothing seafoam greens that are interlaced with a gray-white matrix.