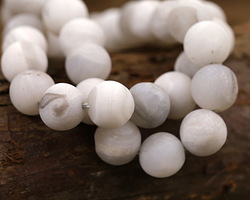 White Lace Agate reminds us of antique lace curtains casting shadows in the evening sun. We love it! This stone is at once classic and trendy. White Lace agate gemstone beads are named for their color and unpredictable patterning. The name Agate is associated with the Achates River of Sicily, now known as the Dirillo River. Agate was utilized by ancient Greeks and Romans for decorative carving and arts, and examples from that time are still extant.

“My summer garden 2”
by Medieval Momma