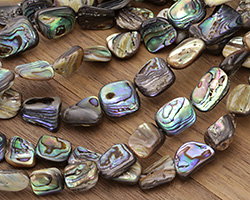 Both sides of our abalone beads are a gorgeous, iridescent rainbow of electric blues, greens, grays and pinks. The beautiful colors are outlined by undulating lines of dark brown.

Abalone are a group of mollusks (shellfish) with flattened, spiral-shaped shells that live clinging to rocks beneath the ocean’s surface. The innermost layer of abalone shell is composed of a substance called nacre, or mother-of-pearl, which is highly iridescent, making it ideal for use for decorative purposes. Nacre is also known for being exceptionally strong. It is made of microscopic tiles of calcium carbonate that are stacked like bricks. Between the layers of tiles is a sticky matrix made of organic polymers. When nacre is struck, the tiles slide rather than cracking and the polymer stretches to absorb the energy of the blow. Scientists at the University of California are studying the structure of nacre to gain insight into methods for producing stronger synthetic materials. The iridescent appearance of nacre is due to light bouncing between the layers of calcium carbonate.