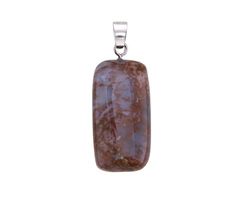 This agate is mined in the hills of the Agua Nueva Ranch, which lies in a remote area of Chihuahua, Mexico. The predominant colors in these gemstone beads are a rich caramel brown and a deep, rusty red – the coloring reminds us of a delicious caramel apple – yum! Many of the Agua Nueva Agate beads also contain semi-transparent, milky gray-white portions in which the beautiful banding characteristic of the agate family is clearly evident.