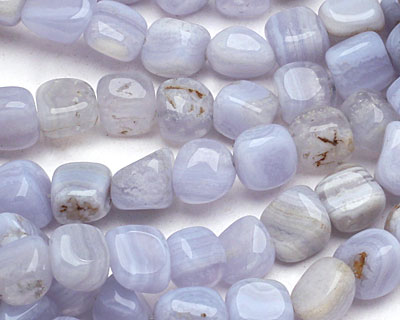 We love a good agate variety at Lima Beads, and we think you're definitely going to love these stunners! Blue lace agate beads display lacy bands of soft lavender and periwinkle blues and milky whites, alongside transparent layers. The most notable sources for blue lace agate are Namibia and South Africa, with the very best specimens coming from a narrow vein on the Ysterputs Farm in southern Namibia.

Blue Lace Agate is a banded agate composed of thin, multi-colored layers of chalcedony and crystalline quartz. The different band colors arise from trace amounts of elements such as iron and manganese. Agate is a variety of chalcedony, which is itself a form of quartz.

Blue lace agate is thought to be a great de-stressor. Blue lace agate is said to provide a calming effect on its wearer and aid in a clear expression of one’s self. Many wear this stone to calm anxiety when giving public speeches.

“I Told Myself Dilly Dilly”
by Melody F