Follow the Crossword Sale for a new sale every day in January. The sale for January 28 is: Ceramic and Porcelain! 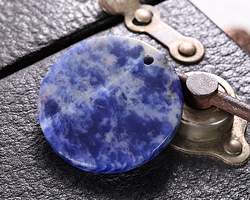 This necklace showcases the modern style of the Moss Agate Coin by wire-wrapping it onto the...

I created this necklace that will match whatever mood I'm in:)This necklace has interchangeable...

“Who’s Got The Blues?”
by Althea A