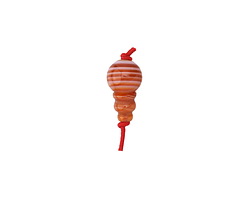 Natural carnelian ranges in color from white to orange to dark brown. This stone is named natural carnelian to reflect its display of the natural range of carnelian color. These carnelian bead strands are some of our most popular because of their versatility and beauty. The origin of the name Carnelian is ancient and mysterious. The name Carnelian could be derived from the Latin word "carne", which means “flesh”. Another theory claims that the “cornel” cherry could be the source of the name. There is also a similar-sounding Persian word meaning yellow-red. Carnelian has been utilized for decorative arts for at least 7,000 years! Egyptian tombs are full of examples of carnelian jewels because the ancient Egyptians believed that carnelian amulets would ensure a safe passage into the afterlife. Carnelian was also highly valued by the ancient Greeks and Romans, who used it for signet rings.

If you're looking for carnelian with similar color variation and rich color, check out our Madagascar carnelian beads. Carnelian is a variety of chalcedony (microcrystalline/cryptocrystalline quartz). Its translucent, orangey-red coloration is primarily due to the presence of iron oxide.

Carnelian is an alternative birthstone for August. Metaphysically, it is believed to enable confidence and creativity.