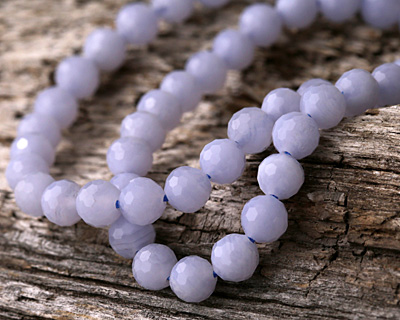 Historical record illustrates that chalcedony is one of the oldest used hard materials by humans. Chalcedony was shaped into everything from arrowheads to cups and bowls. Our chalcedony beads are a tranquil, bluish-white color. Some portions of the beads are milky and opaque, while other portions are almost transparent. A few might feature light orange inclusions. The soft color of these chalcedony beads goes wonderfully with freshwater pearls.

In general, Chalcedony is a microcrystalline variety of quartz. In its purest form, chalcedony is a translucent white color. However, it often contains microscopic traces of other minerals that give it a variety of colors. For example, carnelian is a variety of chalcedony that has a reddish-orange color due to the presence of iron oxide. Most gemstones on the market called chalcedony are a white-blue coloration.

» More Chalcedony or Faceted Round

For this design, I wanted to create a simple necklace that would accentuate this beautiful Peach...

This week I was really excited to design with these new gemstones! I was especially looking...