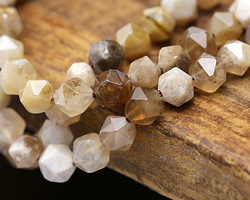 Dendritic Fossil Ocean Agate is not your usual agate! Agate is a variety of chalcedony, which is itself a form of quartz. There are a multitude of agate varieties specific to locations all over the world.

These Dendritic Fossil Ocean Agate gemstone beads do not feature the usual banding characteristic of agate, but instead are semi-translucent with dendritic inclusions. These dendritic inclusions look like moss or ferns. They are composed of manganese or iron.

“Two Cats under the Stars”
by BelgianStar