Shop the Czech Glass Trunk Sale: Save on 1,000 strands through Saturday! 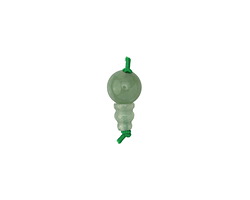 These Green Aventurine gemstone beads are a smooth aloe green color, and they flatter almost every skin tone. The most common color of aventurine is green, but the stone can also be found in shades of red, orange, brown, yellow, blue, and gray.

Aventurine is a form of quartz, characterized by its translucency and the presence of platy mineral inclusions that give a shimmering or glistening effect. This shimmering effect is called “aventurescence”. Chrome-bearing fuchsite (a variety of muscovite mica) is the classic inclusion, and gives a silvery green or blue sheen.

Green Aventurine is thought to increase luck and prosperity. Many wear this stone to better their chances, at the casino or on a date. Green aventurine is specifically associated with clear-eyed vision in overcoming negative obstacles.