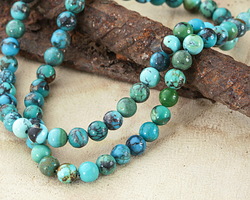 Springy turquoise beads ideal for your next design. With a green-dominant hue, these little wonders have an earthy yet elegant quality. Easily add to boho designs.

Hubei Turquoise is some of the nicest turquoise mined in Asia! Named for the Hubei Province of China. The majority of the world's turquoise now comes from mines in China, due to the scarcity of American turquoise. Some industry experts expect the Chinese varieties to go up in price over the next decade, as it too becomes more rare. Most Hubei turquoise rough is stabilized for strength. This helps to prevent chipping and crumbling. Turquoise derives its name from Renaissance France, where Europeans were introduced to the stone via Turkey (though those stones were traded from Iran). Turquoise has been used in jewelry-making for at least 5,000 years!

Turquoise contains copper and aluminum, as a hydrated phosphate.

Turquoise is said to be a healing and protective stone.

For this design, I paired various sizes & shapes of turquoise with amazonite, seed beads, and...

“Imitation of Greatness”
by EPBCornell

“Turquoise Utopia”
by SilverCords aka Judy