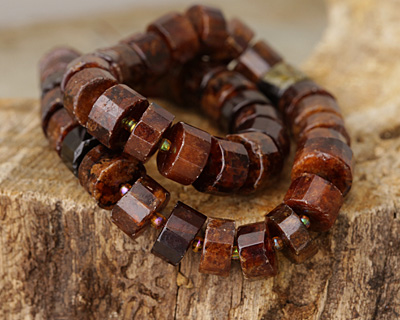 Hessonite beads have a wonderful variety of rich color that reminds us of cinnamon and caramel - delicious! We're craving caramel apples and cider. Put another way, these gemstone beads are often the color of ochre and natural henna. Earthy and wearable, you won't be disappointed with Hessonite.

Hessonite is also called Cinnamon Stone or Cinnamon Garnet. Deposits are found in Sri Lanka, Brazil, India, Canada, Madagascar, Tanzania, and the United States. Hessonite is a type of garnet. The term garnet actually refers to a group of more than ten different gemstones that have a similar chemical composition. While the wine red varieties of this gemstone are most familiar, garnet can also be found in various shades of pink, green, yellow, orange, brown, and black.

Hessonite is believed to be a stone of wisdom and help facilitate success.

“professionalism #5”
by CB A