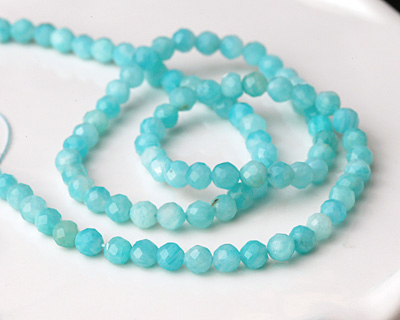 Madagascar Amazonite gemstone beads are blessed with lively and bright ocean color. These semi-opaque stones evoke clear blue waters of the Caribbean. Amazonite, also known as Amazon stone, is a classic case of mistaken identity. A greenish color stone was worn by Indigenous Peoples in the Amazon area of South America, and European colonists believed these adornments were made from a stone already familiar to them (likely Amazonite mined from Russia). The name Amazonite took off even though no Amazonite has been found in the Amazon, and the Indigenous Peoples were likely utilizing jade.

Amazonite is a type of microcline feldspar. It has a long history of utilization in jewelry and carving, including examples from Ancient Egypt.

» More Madagascar Amazonite or Faceted Round

Cabernet on the Bay Necklace

For this layered necklace, I used these new Czech Glass petal drops to create a simple focal...

When I first saw these new Czech Glass oval beads, I knew I wanted to design something with them....

“Turquoise Dreams”
by dolllady aka Pam