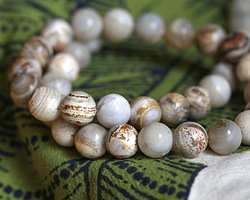 These highly-patterned agate beads are practically celestial in appearance, with a look like mini planets. This neutral agate pairs wonderfully with bright colors. With specks and streaks of orange, these strands act as an ideal partner to turquoise.