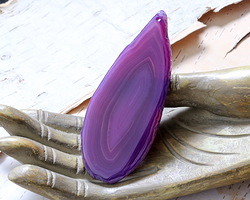 Pretty in Purple! 💜 Gorgeous agate slices in the color of royalty. Easily create bold necklace focals or use for home decor projects. Please view additional images for variance in size, shape, and coloration.