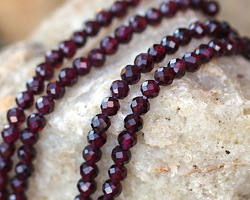 Like dark red wine, these little sparklers are an enchanting, mysterious coloration. Add to earrings for a little sophisticated shine, use for dainty beaded bracelets, and add to necklaces surrounding a large focal. The possibilities are endless!

Rhodolite garnet gemstone beads occur in distinctive raspberry to rosy hues. Perhaps a “bouquet” of these beads for the one you love? Garnet’s name is derived from the Latin word “granatum”, meaning pomegranate. Garnets share a similarity in color with pomegranates, and small stones look like pomegranate seeds. The term Rhodolite comes from the Greek word “rhodon” meaning rose.

The term garnet actually refers to a group of more than ten different gemstones that have a similar chemical composition. While the wine red varieties of this gemstone are most familiar, garnet can also be found in various shades of pink, green, yellow, orange, brown, and black. The most common red varieties of garnet are called Pyrope and Rhodolite. Other common gemstone varieties of garnet are reddish-to-golden brown Hessonite, and yellow, green, and brown Grossularite (Green Garnet). Rhodolite garnet is often found in the United States, but is also found in countries around the globe.

» More Garnet (Rhodolite) or Faceted Round

For these statement earrings, I used an amazonite teardrop as a focal topped with clusters of...

For this design, I used a mix of gemstones, Czech glass, and African brass to create this lariat...