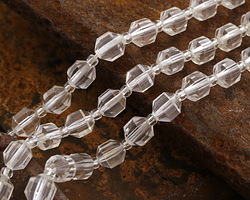 Sparkle sparkle! ✨✨ Classic, colorless crystal is so easy to incorporate into jewelry designing. Precision cut by lasers, our prism-style beads are faceted masterpieces perfect for elegant earrings and trendy layered necklaces. Each bead has 12 sides showing off the beautiful pattern and color of the stone. This style is often referred to as lucky faceted or crystal energy prism beads and is believed to bring forth positive energy.

To create this Mala-style necklace, I used gemstones representing the 7 Chakras: root (red...

I always find myself drawn to these beachy color combos, no matter what time of year it is! I...