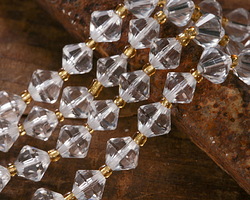 I love these pretty in pink Etched Snowflake Czech Glass beads. This chilly design can be worn...

I wanted to use the teardrop focals in an interesting way. I liked the hammered textured element...