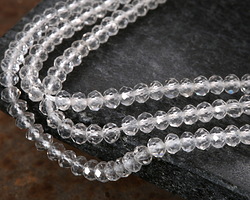 Stones with supreme sparkle and shine! ✨ With such a versatile size and cut, these rondelles are easy additions to elegant earrings, dainty bracelets, bead chains, and more.

This week I wanted to design something with a color palette that I don't normally use, and I love...