Follow the Crossword Sale for a new sale every day in January. The sale for January 18 is: 500 Trending Supplies! 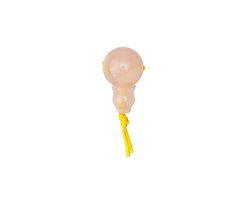 So soft, so feminine, so affordable! Rose Quartz gemstone beads range in color from pale hues to darker rose shades. With the exception of our Madagascar rose quartz, the beautiful pink color of these rose quartz beads is a result of heat-treating. Almost all rose quartz on the market today is heat treated, but natural deposits can still be found in Brazil and Madagascar.

Rose Quartz is macrocrystalline, meaning crystals and grains are visible to the eye. Usually it is found in large clusters but occasionally found as singular crystals. The Quartz family is a silicon dioxide, and the most common mineral in the Earth’s crust.

What could be more positive and powerful than love? Rose quartz is said to open its wearers to love and compassion of all sorts. Not just for romantic love, this stone is also thought to encourage a love for the self and help build meaningful friendships. It is often associated with the heart chakra.