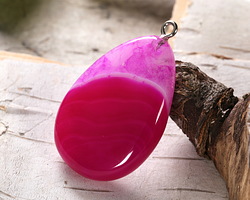 Here at LimaBeads, we 💖 bold, colorful agate! Ideal necklace focals, these ruby-hued beauties have a large bail perfect for use with leather cord or silk ribbon. Please view additional images for variances.

“Tribute to Norma”
by Granny Nancy