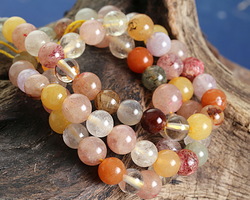 An elegant mix of multi-hued rutilated quartz ideal for so many design styles! Easily attain minimalist elegance or more is more luxury with this striking strand. Add to Mala necklaces, beaded earrings, and layered bracelets.

“For the love of fall”
by Pixie