Cyber Week Savings: Use code CYBEADER to save on your entire order! Get the Details 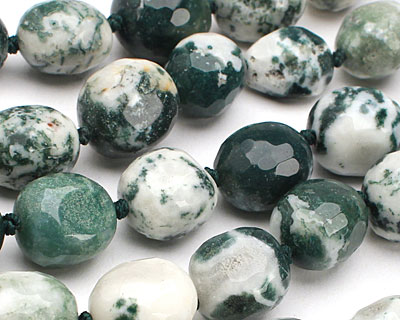 Tree Agate gemstone beads are two-toned masterpieces. With forest green and cream white coloration, these beads have a contemporary look while still being oh-so earthy. Tree Agate is a dendritic agate, meaning it has moss-like or branch-like inclusions instead of the banding typical of other agates. The name Agate is associated with the Achates River of Sicily, now known as the Dirillo River. Agate was utilized by ancient Greeks and Romans for decorative carving and arts, and examples from that time are still extant.

Agate is a variety of chalcedony, which is itself a form of quartz. The dendritic inclusions of this stone are manganese or iron.

Metaphysically, Agates are generally thought of as stabilizers and bring calm energies to their wearers. Tree Agate is associated with the heart chakra.

“Ever Green”
by NY Bella