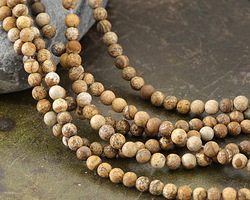 I love the layered patterning in picture jasper and its implicit connection to the Earth. By...